Known limitation before version 2.1.1: The user creating a UserRequest must be allowed to see the approvers, otherwise the User Request stays in New status. The issue will occur if the Requestor has allowed organizations but the approver does not belong to one of those organizations

Use the Standard installation process for this extension.

After installing this module, configure a proper email_sender and configure trigger/action to ensure “Approval eMails” delivery.

Email notification is based on Trigger/Action and email content can be tailored to your need with HTML format and placeholders.

A default trigger is created at installation

as well as 3 default actions with body in English, French and German. 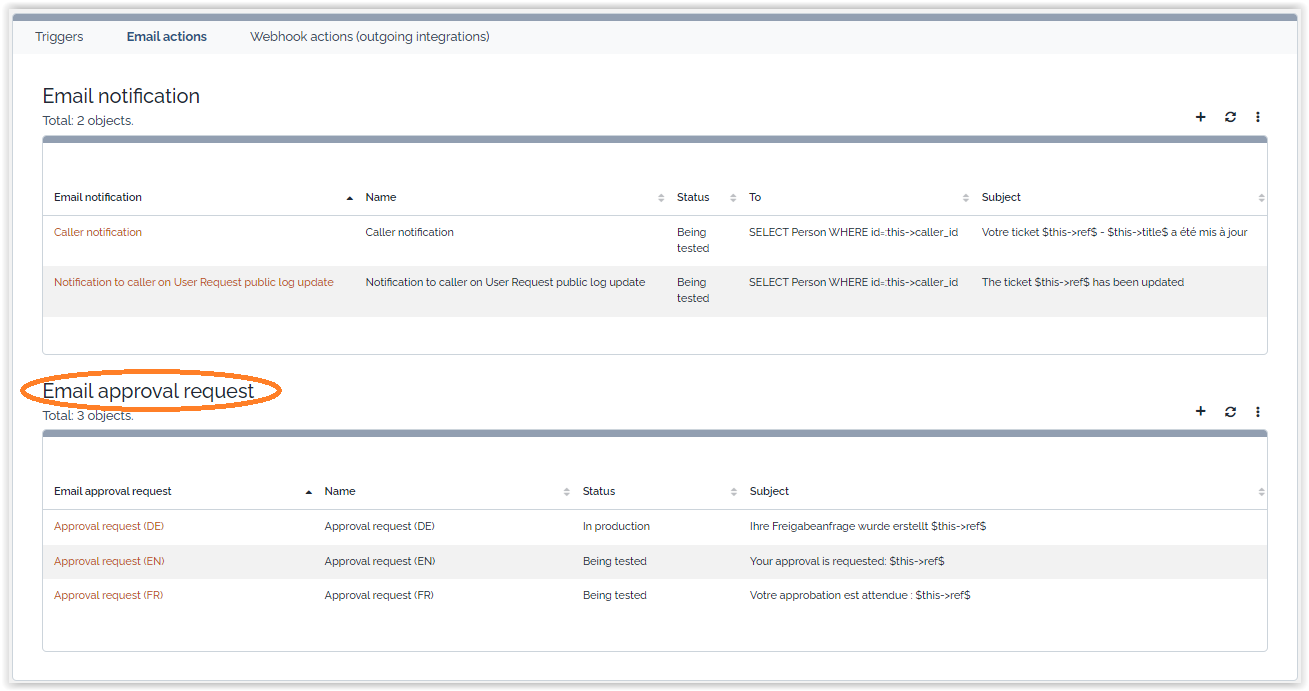 You can of course edit this message to make it yours, here is the english default version for example of possible placeholders: 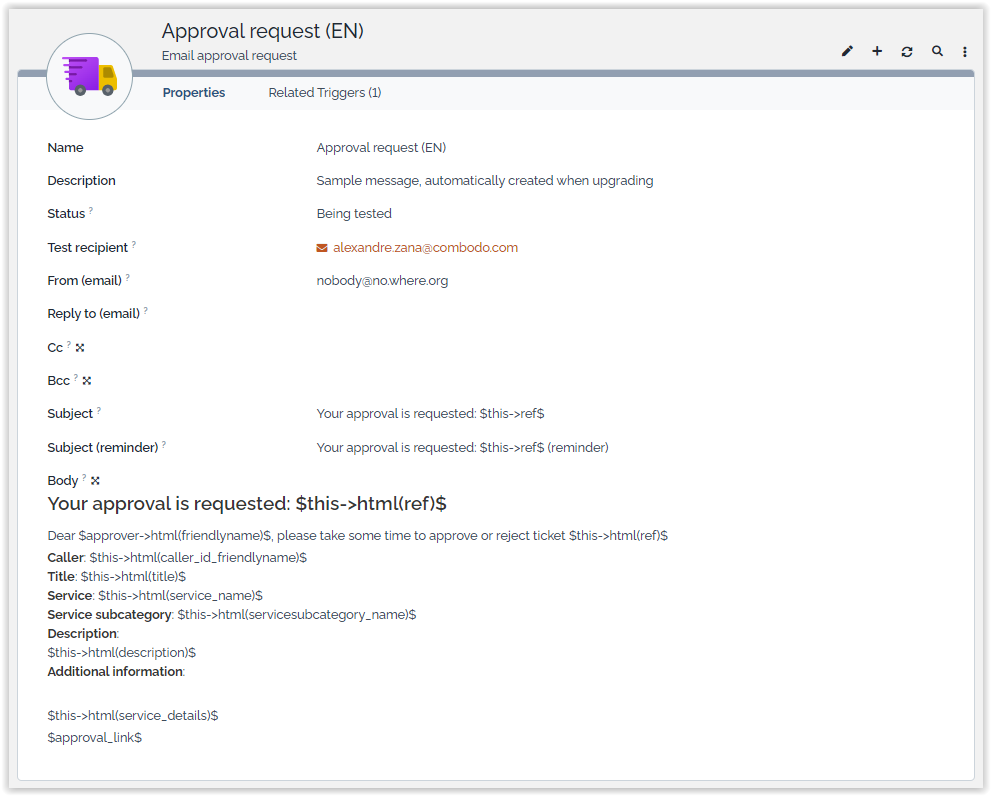 You must create the linkage between trigger and action of the language you want to use. 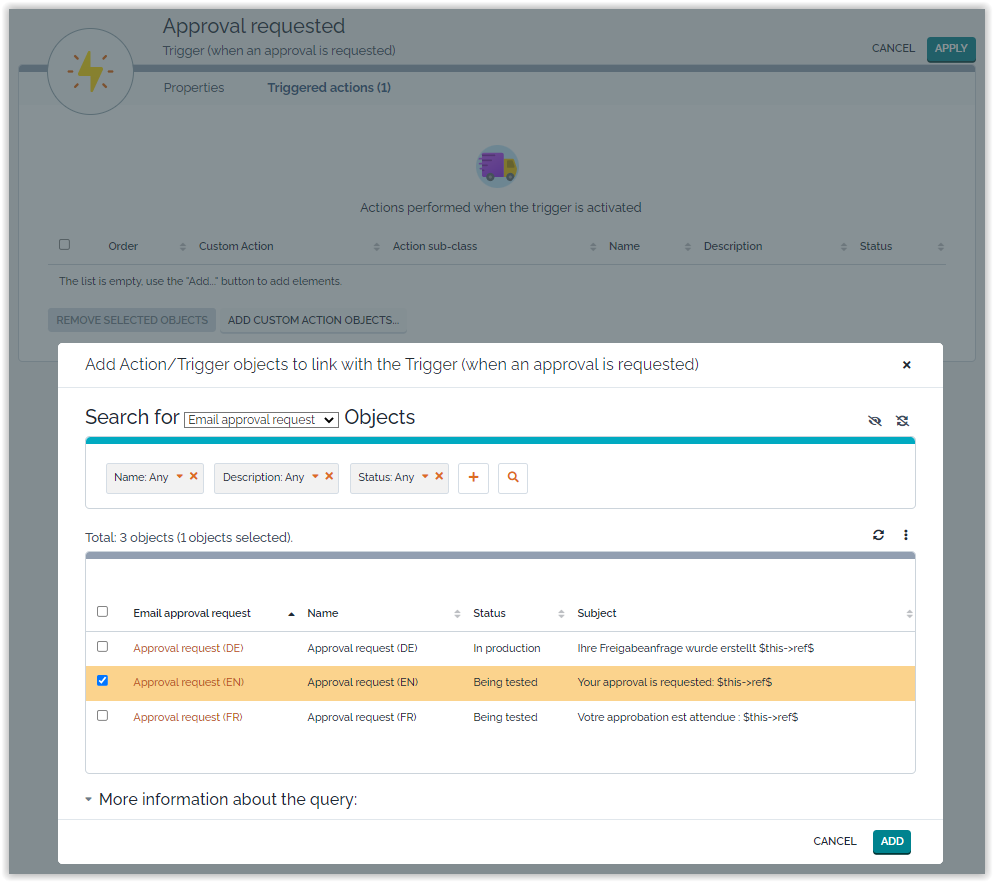 You can create your own trigger and action
If you need to send different notification depending on the organization of the caller, the service, the service family, or any data available on the Ticket, this can be done by creating multiple trigger/action couples, using a filter on the Trigger.

Since version 2.2.1 of the extension, it's possible on any approval level, to add define substitutes (Person) which will be notified and asked to approve on behalf of an official approver if that person has not answered within a configurable delay.

By default Substitutes will receive the same notification email as the initial approver, so addressed to the approver himself. This can be changed, by creating a specific Email approval request 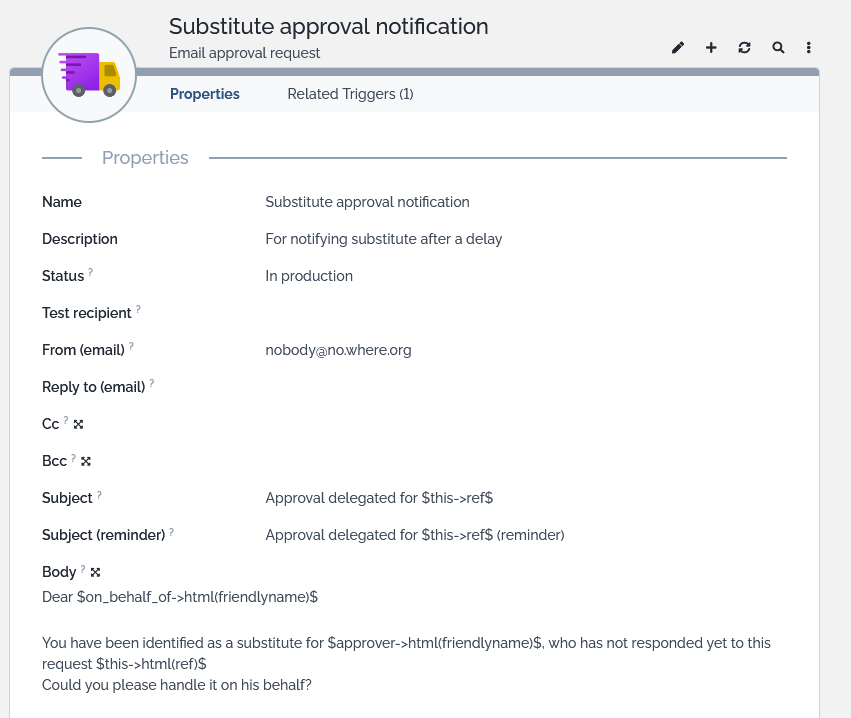 Managing the Trigger (when an approval is requested): 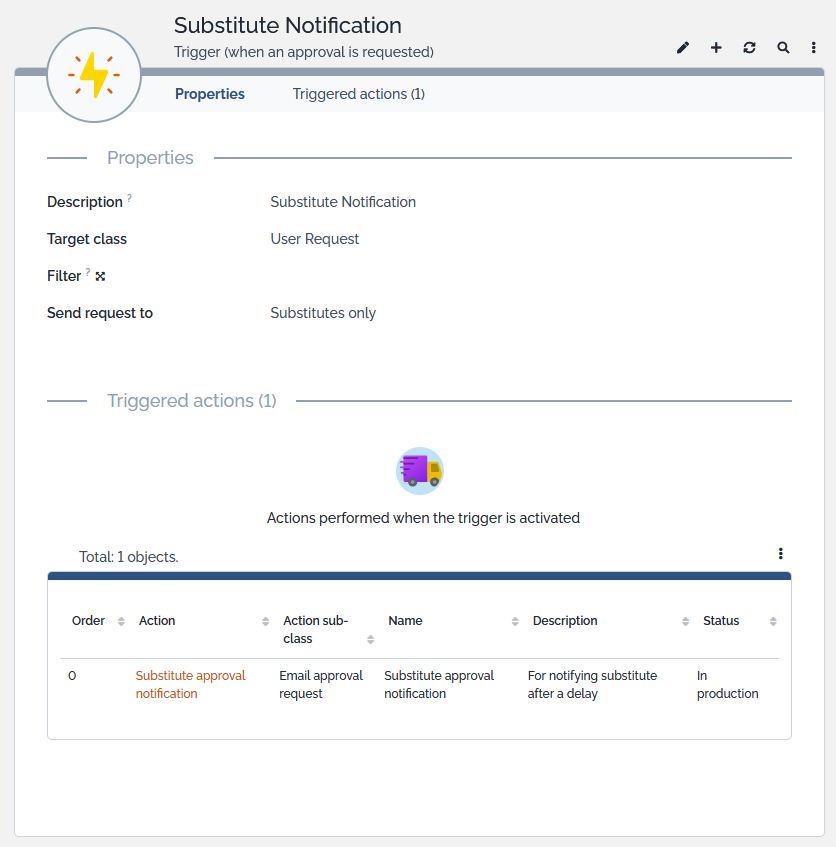 The email contains a web link to display the web page to approve or reject the request:

Once the approval delay has expired, the approval process terminates. The result (approved or rejected) is then taken in the property Approved if no answer of the approval rule. 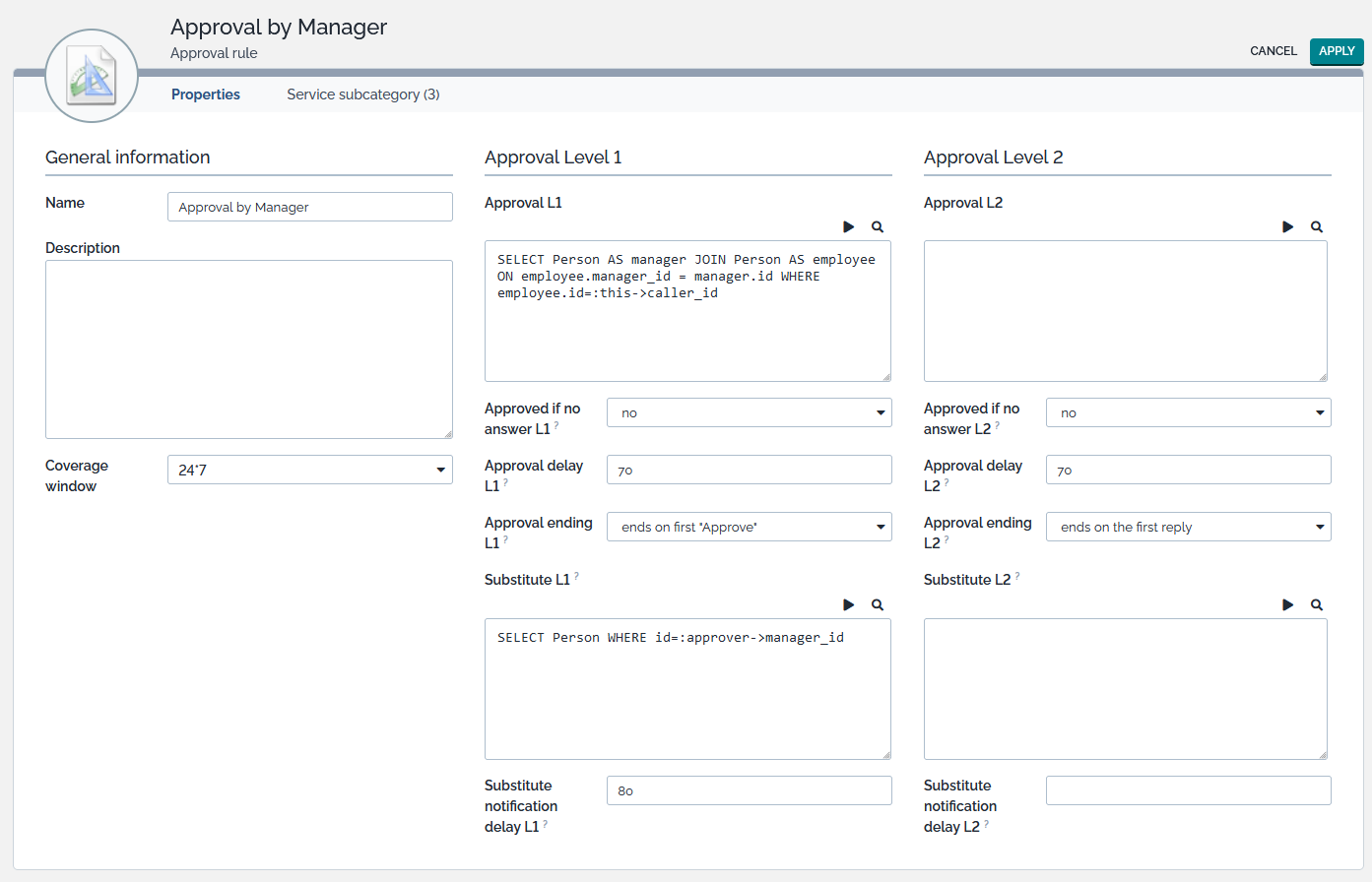 An approval rule is identifier by it name. The coverage window is used to compute the Approval delay.

The fields Approval level (L1 or L2) define, via an OQL query, the list of approvers for each approval level.

The field Approved if no answer determines if the request will be approved or rejected if there is no answer after the Approval delay.

The field Approval delay defines the delay in hours for each level of approval, only hours within the coverage windows are counted.

The field Substitute is an OQL which defines for each approver, who can take their role and answer on their behalf.

The field Substitute notification specifies at which percentage of the Approval delay, substitutes will be notified if their approver has not reacted Approver with an iTop login can connect anytime and check if they have Requests pending their approval. From the Helpdesk menu, click on Ongoing approvals: Approver without iTop login, can still approve or reject Request, but they must have received the email notification with the onetime usage links allowing him to approve or reject without being connected to iTop. 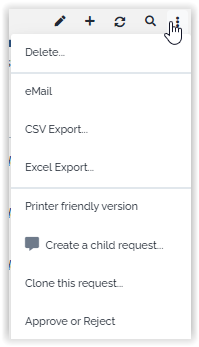 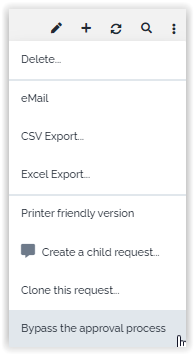 In the above example, the deadline is displayed in bold: 15th of april at 17:32. The status will be entirely reset anytime the user request enters the state “waiting for approval”.

In the situation below, the Ticket was 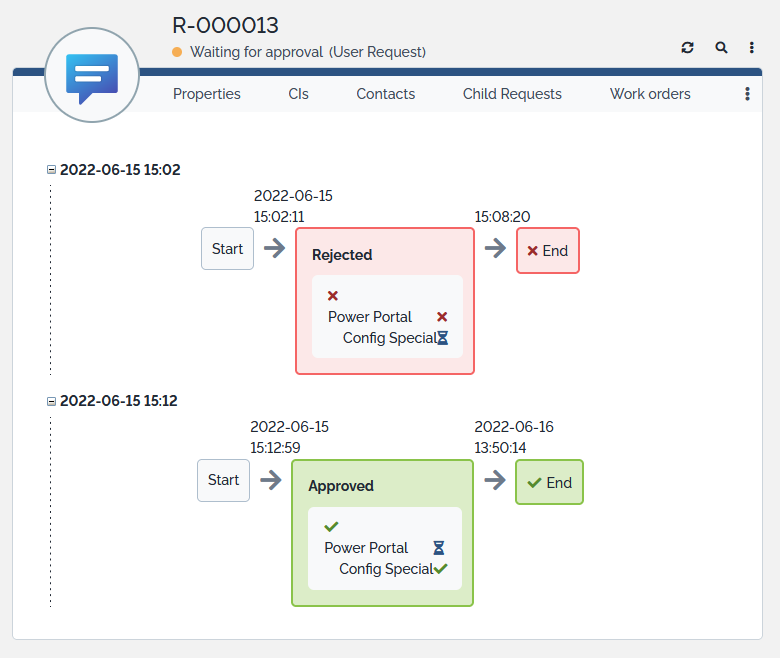 A new menu appears in the Enhanced Portal, which allow an approver to retrieve all User Requests waiting for her approval, and one by one or in bulk mode, accept or reject them.

When clicking on the link to a User Request, the ticket's details are displayed with an extra comment field and two buttons at the bottom of the details to accept or reject it: Question: What happen if the approval rule returns zero approvers, on all level of approval?
Answer: The request is never entering the approval cycle.

Question: My approvers are not using the Portal. How to send them a link to approve in the console?
Answer: To get this behavior, create a real link in the notification:

You may remove or not the $approval_link$ placeholder. Don't remove it if at least one approver has no access to the console.

Question: can we hide the Approbal Brick in the Portal to users based on their Profiles?
Answer: Yes, as any brick in the Portal it supports to specify the Profiles which are allowed or denied to see a given brick

Question: Can I have an approval for New Phone request, only if the price is above a given amount?
Answer: Here we will present an example, where the user is providing in its Request the price of the requested phone in a Customized Request form, and if that price is above a given level, let say 100, then we want a particular person (with id=6) part of the same organization as the caller to approve at the second level. Question: How to automatically send a reminder to Approvers on a percentage of their approval delay?
Answer: If you are not using any Substitute, you can set the original “approvers” as being their own substitute and set an % of the approval delay, to send them a reminder.

Other option, much more cumbersome:

Question: Can I have more than 2 levels of approvals?
Answer: Yes, that requires to write an extension.