Automate creation of recurring objects, such as a recurrent Task. No need to clone your object manually every day, week or month, this extension will do it automatically for you.

This extension allow you to define a recurrence on a object, so it will be automatically repeated on a defined frequency.

Consider non-listed type of attribute as not working.

The cron must be running on your iTop to create daily the missing objects on active Series.

Use the Standard installation process as for any extension.

This extension requires a configuration.

Here is the default one:

The two parameters above, apply to all series. On first creation and when the cron runs, the extension create new objects, as long as the next object to be created is before (now + create_ahead_max_days * days) and there are less than create_chunk_size objects created in advance.

Assuming in your iTop configuration, WorkOrder is configured for recurrence, then create a Work Order:

Check the checkbox and it pops-up a recurrence form: 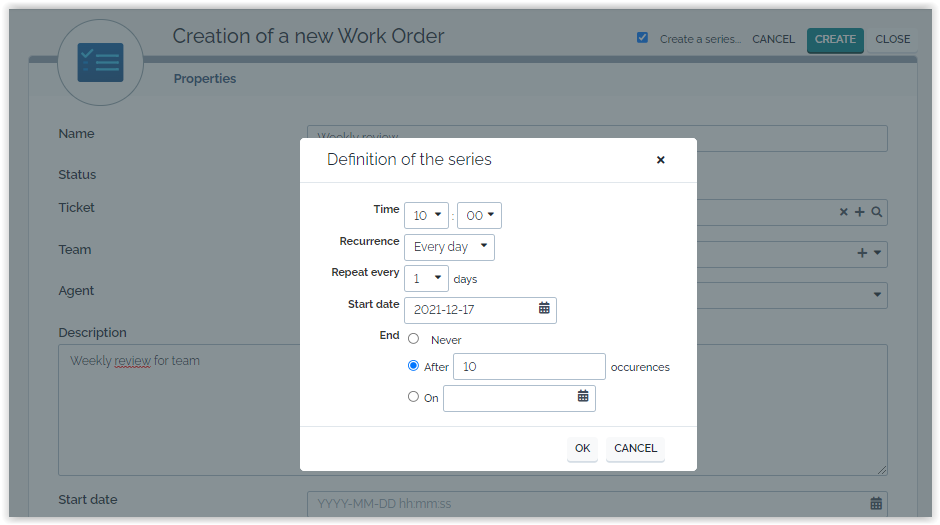 You can set a weekly recurrence, with one or multiple days within a week 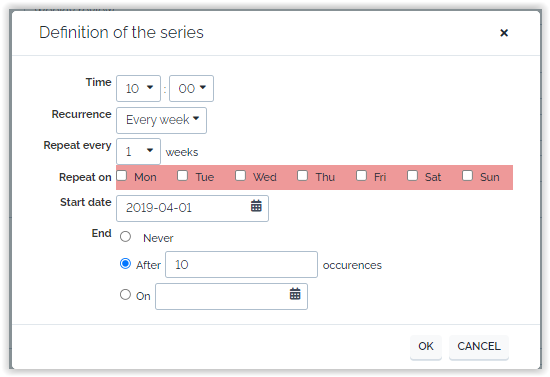 You can set monthly recurrence, with 2 options
Assuming the starting date of the recurrence is the Tuesday 2nd of April 2019 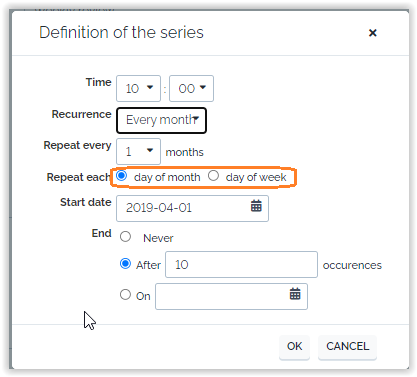 You can also set

If you change the date in the pop-up recurrence form, it will copy the changed date on the object creation form under it.

Be cautious, if you do the opposite, it does not refresh the recurrence starting date, which remains as you set it.
Example: daily recurrence with start date on 2019-04-10, then you modify the created object to 2019-04-05 and submit. The series will start with those dates:

Display any object member of a given series. When an object is part of a Series, there is a little icon just after its name which display a tooltip:

and in the actions, select the Edit the series…

In the new screen, you can set a starting date, so you will modify the Series template and bulk modify all objects of the series after that date:

In the above example, one of the created object was manually deleted, which explain why 9 where created and we are going to modify 4 out of 8 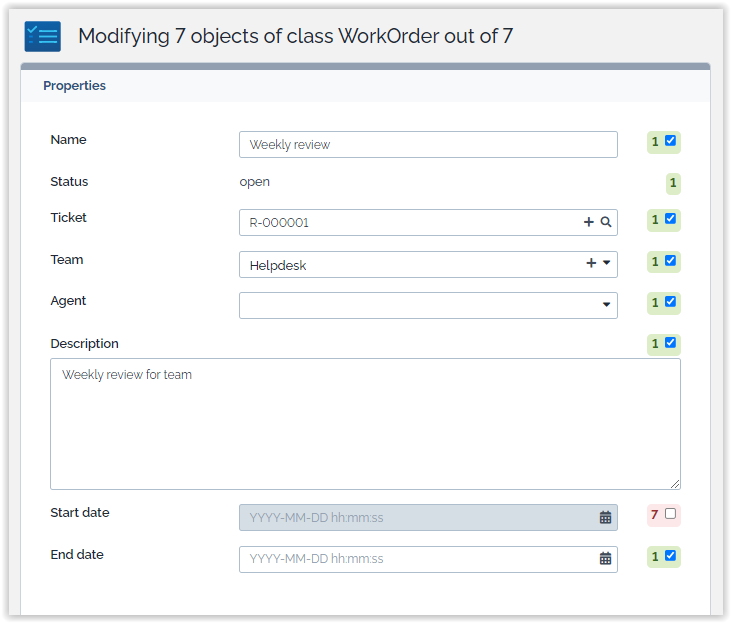 Display any object member of a given series, and in the actions, select the Edit the series…

In the new screen, set the date after which the Series will be stopped, and press the “Delete…”

If you add the parameter holidays_query in the configuration file, a new check box 'Exceptions“ will appear for each series definition allowing you to exclude holidays 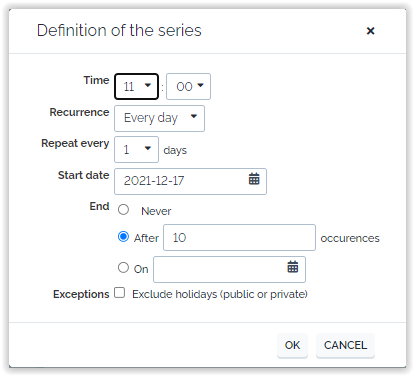 Q: Objects are not automatically created.
A: Is the cron running and when is the next_run_date for the Background Task SeriesOfflineCreation?

When running test, you can delete this row to force that Task to run again immediately, as long as your cron is running.

Q: I have modified the first (or the last, or the next to come) object of my Series, but the newly created objects aren't taking into account my change.
A: To change the to-be-created objects, you have to modify the Series, through the action Edit the series…

Q: I have delete the last object of my Series, will it be recreated by the cron?
A: No, the Series knows the date of the last object it has created and whatever you do with this last created object, deletion or date modification, it will continue the Series as if you had done nothing.

Q: What if there is a uniqueness constrains on a field which is part of the Series template?
A: We haven't tested yet, but in theory only the first object will be created and the Series will fail with error message(s), the cron hopefully will not fail and just log error messages, to be checked

Q: As an Administrator, can I check all active Series?
A: Yes, this can be done in OQL. The content of the recurrence and the template are in json, but it's more or less human readable.

Q: The background task SeriesOfflineCreation has not been running for a long period, how to restart object creation from today only, without creating object in the past
A: This needs to be done in SQL. In the below example, I am asking all series to start again from 2019-04-16, replace by yesterday's date.

Then start again the background task and your cron.php if it wasn't running either.

Q: How to retrieve all the Objects associated with an active series
A: This can only be done in SQL for now. Example for WorkOrders part of an active series starting after a given date.

Before 1.0.4 the OQL will fail with this error.