In iTop all the data (including the uploaded documents) are stored in the MySql database. Therefore it is highly recommended to have a database backup in place on a regular basis !

An iTop backup can be generated using :

What does an iTop backup contain?

Notes
If you have installed new modules after running a backup, restoring the backup is equivalent to uninstalling the modules.

If you have upgraded iTop or added new modules since the backup has been made, be aware that restoring may end-up with a database not aligned with the code base. After the restoration, iTop may not work. It's recommended to run the Setup to align the Database to the iTop Datamodel (brought by the new iTop version or recently added extensions).

Since iTop 3.0.0 all the backup and restore operations will switch iTop to the read only access mode.
Database backup can only work if the exec PHP function is enabled. Warning, there won't be any error messages if it isn't, and the backup won't get generated.
If this PHP function can't be enabled, you should do a manual backup.
If the database size is bigger than 68GB the backup will be executed without any warning, but you won't be able to restore it. This is due to the implementation of php-tar that corrupt the tar file for size bigger than 68GB
So don't use the iTop integrated backup solution if you have big database. We recommend to use mysqldump command described below and your own backup system.

Starting with iTop 2.1.0, a special menu “backups” is available to the administrators: 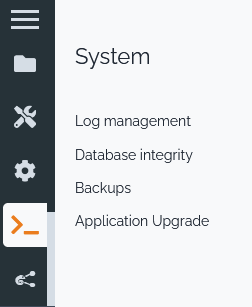 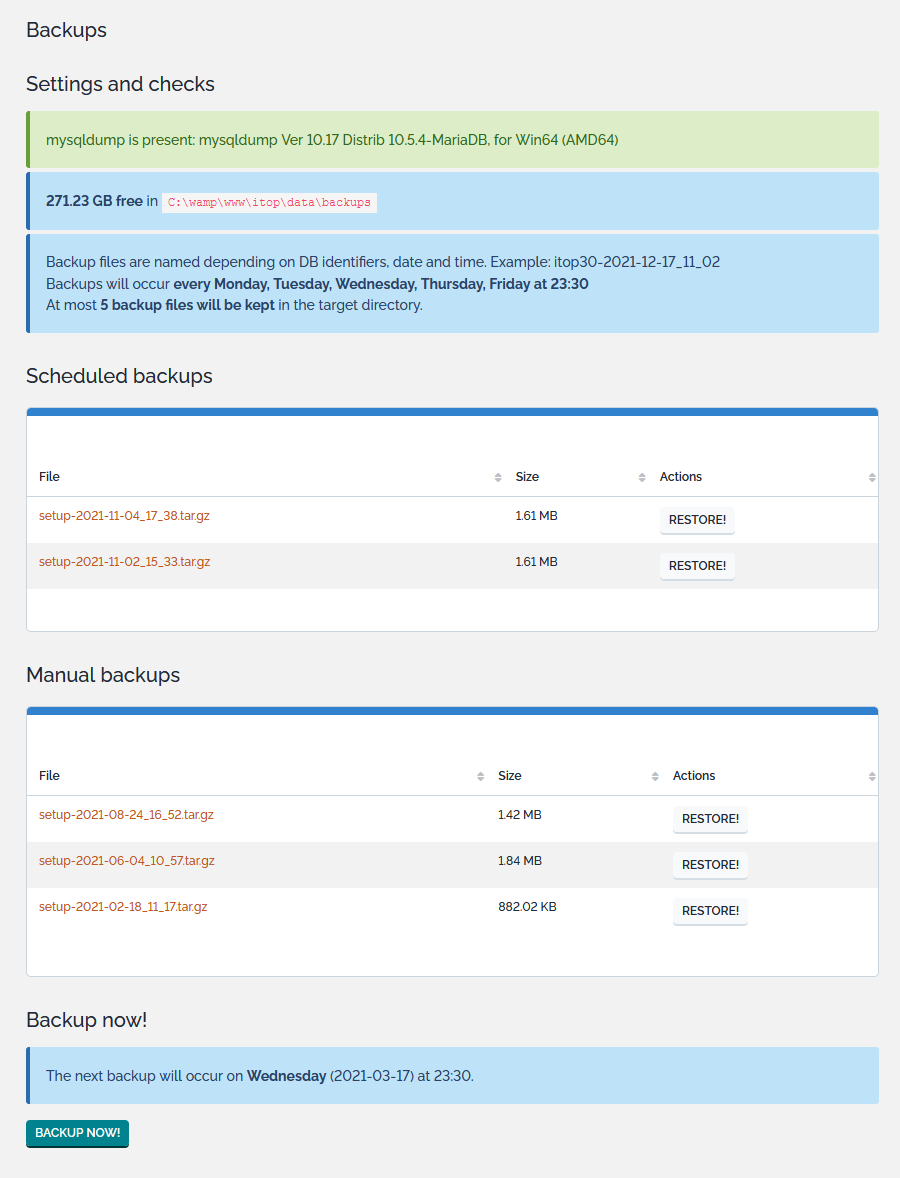 “Scheduled backups” are referring to the one produced by the background task. For more details refer to the dedicated chapter below.

Click on the Backup now! button to perform a backup (no confirmation requested):

Changes in the scheduling (including disabling the feature) the next scheduled backup will still occurred as previously configured, then your change will be taken into account.

The backup overview page does not inform you if the backup is totally disabled.

you can generate a backup using this command:

CLI backup operation can only be done using an administrator profile.
Since iTop 3.0.0 it is possible to launch this script even if the standard scheduled backup (cron.php) is enabled : a wait will prevent two backups to run concurrently.
Before this iTop version (for example in iTop 2.6.* or 2.7.*), script and scheduled backups can conflict with unpredictable results.

A param_file can be passed as a parameter to the backup.php script. For example :

A sample parameter file is bundled in the module : datamodels/2.x/itop-backup/backup.params.distrib

All of those parameters can be passed either in the command or in the param_file.
If no mysql_bindir parameter is specified (nor in command line, neither in param_file) then the iTop config file parameter will be used.

This script is also bundled with the module : datamodels/2.x/itop-backup/check-backup.php.

This is a monitoring utility, it must be executed after backup.php.

Ticket creation in case of failure requires that you have installed the Incident Management module on the iTop on which you want to create the Incident
It can be a different iTop instance than the one on which the backup is performed. It's identified with a param_file itop_backup_incident

This script was introduced in iTop 3.0.0 and isn't available in previous versions.

you can restore a backup using the command:

CLI restore operation can only be done with an administrator profile.
File permissions

Restore operation does not set back file permissions.
You may have to do chown (www-data) operation again on the following files: