This document highlights issues which can occur while migrating your iTop to this version.

This version has a major impact on users habits. Check the What's new document for all the changes impacting the ways things used to be done in the past and how they should be done in 3.0.

To check before upgrading

Be aware that a lot of iTop extensions must be upgraded to a 3.0 compatible versions
If you have custom extension(s), read how to migrate an extension to 3.0

We have added a field user_id in table CMDBChange to identify users who made the change.

If you have developed custom extensions with XML and custom code, check: Developer check-list

Those features are now included in iTop 3.0 so in general no more needed as additional standalone extensions

If you have customized the theme in XML, you must change it to follow the new 3.0 standard: Theme Customization, especially imports>import>xsi:type 2.7 theme customization variables are probably obsolete, see above page to migrate your theme.

The dependencies node of the manager_id has been removed as there was no usage of org_id in the default OQL filter. It's probably from a time where Manager was limited to the organization of the Person. If you removed or redefined it, you will need to adapt your XML.

Datamodel in iTop 2.7 and older

If you have a Combodo Product or installed Mail to Ticket Automation: check that Users which must be able to access the Mailbox, can still do it, and if not change their Profile(s)

class:MailInboxBase and class:EmailReplica are now by default not visible to non-administrator, unless explicitly granted with read access, through a profile (internally, category was changed from bizmodel to grant_by_profile).

This was an old and unused feature from iTop 2.0 which we decided to completely remove during the backoffice rework. It means that if you used the `display_template` property of a (PHP or XML) class to display its form differently, it won't work anymore in iTop 3.0, the standard form will be displayed instead.

To ease the migration, the application will upgrade safely if the property is still present in the XML / PHP (it will be silently ignored). Even though it is not mandatory for the migration, we recommend that you remove any usage of this feature.

Example of customization in an XML class in iTop 2.7 and older

Before running unattended installation you have to adapt the XML file you intend to provide to dedicated script unattended_install.php.

Below is a list of the deprecated configuration parameters, this mean that they will no longer have any effect in the application.

We removed a bunch of images from iTop, if you used them you'll need to replace them with their new SVG equivalent which are in the same folder.

Some of the images included in the datamodel's modules have been replaced with new SVG files which:

Most of them can be found images/icons. Icons specific to a class state can be found in the corresponding module's images folder.

The old PNG files are still present to ease the migration but will be removed in the next version.

To check / do after upgrading

The triggers are now called AFTER the database update (instead of before). The requests used to filter the triggers will behave differently than in iTop 2.7, if one of the Target fields is used in the where condition of the OQL Filter.

Check immediately after migration, the Filter on your Trigger On Object Update if it uses a condition on an updated field

Example, where the field “priority” is used in the WHERE clause of the Filter and is part of the Target fields: 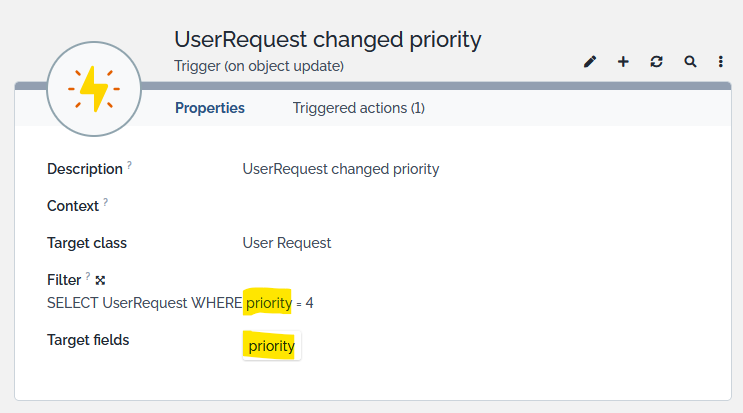 On such Trigger, the Filter must be changed, because it won't be triggered in the same situation as before migration.

In the console (backoffice):

Here is how you can customize the logos.

You have created your new MenuGroup, you may want to set an icon. For Combodo's customer, this can be done in the ITSM Designer

You have created your own class, you may want to change the icon. For Combodo's customer, this can be done in the ITSM Designer

You have modified the possible values for User Request status and priority, you may want to highlight status for the new status (and the standard ones). For Combodo's customer, this can be done in the ITSM Designer.

The selected caselog when opening/editing an object is always the first one. We have changed the datamodel to reflect this, but if you have overwritten the XML presentation of the UserRequest or the Incident classes, you won't get our fix, and most probably you will have to reorder the caselogs this way:

The same applies to the presentation of the Incident class.

If you have access to the ITSM Designer, check the details presentation and add the caselogs to it, in the desired order.

With the new activity panel came a few parameters to tune it:

Since the introduction of the activity panel in the backoffice, the origin of the CMDBChanges (history entries) are now displayed when it wasn't done in a classic form in the GUI (eg. Webservices, email processing, custom extension, CSV import, …)

CSV import in the backoffice

Unfortunately there is no easy way to correct the previous entries on the DB.

In iTop 2.7 and older, the origin of the CMDBChanges made through the “Mail to ticket automation” extension were marked as “custom-extension” when they should actually be marked “email-processing”. This has been fixed in iTop 3.0 but only for the CMDBChanges made AFTER the migration, meaning that the old history entries made via the extension won't appear like it.

If you would like to the previous entries in the DB, you can run the following query, but keep in mind that it can take a very long time as this table is one of the most important in the DB.

In the following query, replace the <DB_SCHEMA> and <DB_TABLE_PREFIX> by the values used in your iTop configuration before running the query.