Display and Modification of an object

The details of an object are always displayed in the same manner in iTop, as shown below: 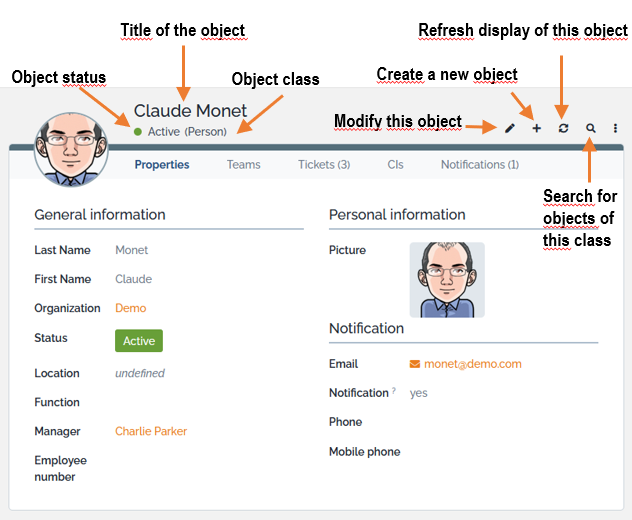 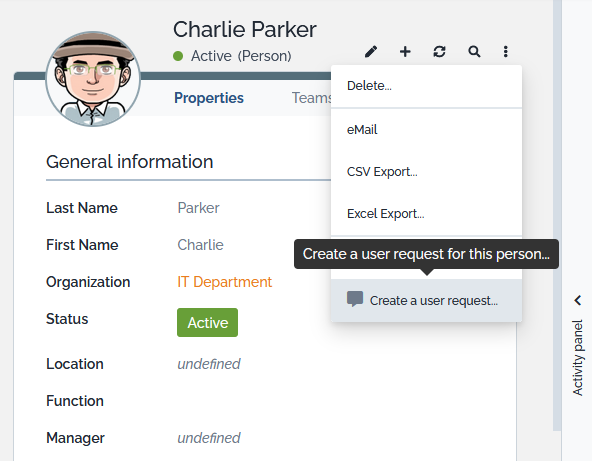 The actions allowed for this object are listed at the top-right. The most frequent actions are displayed as icons.

In this example, the Create a user request… action on the details of a Person, is brought by the extension User action Configurator

When you scroll down, the banner is reduced but stay visible on top, so actions remain accessible all the time 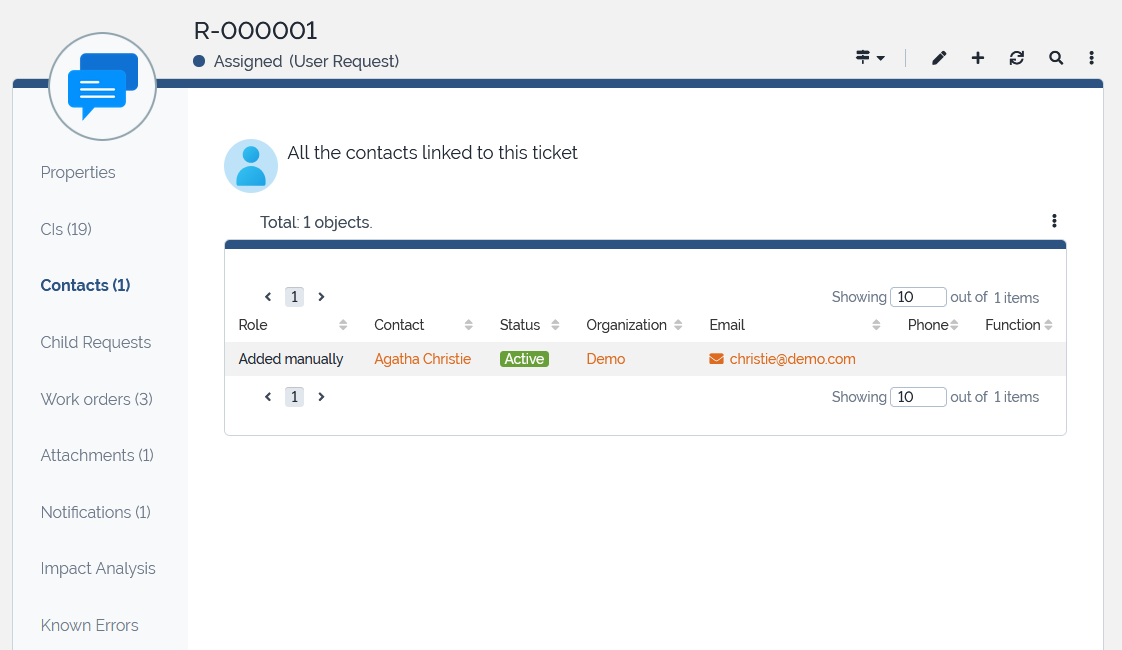 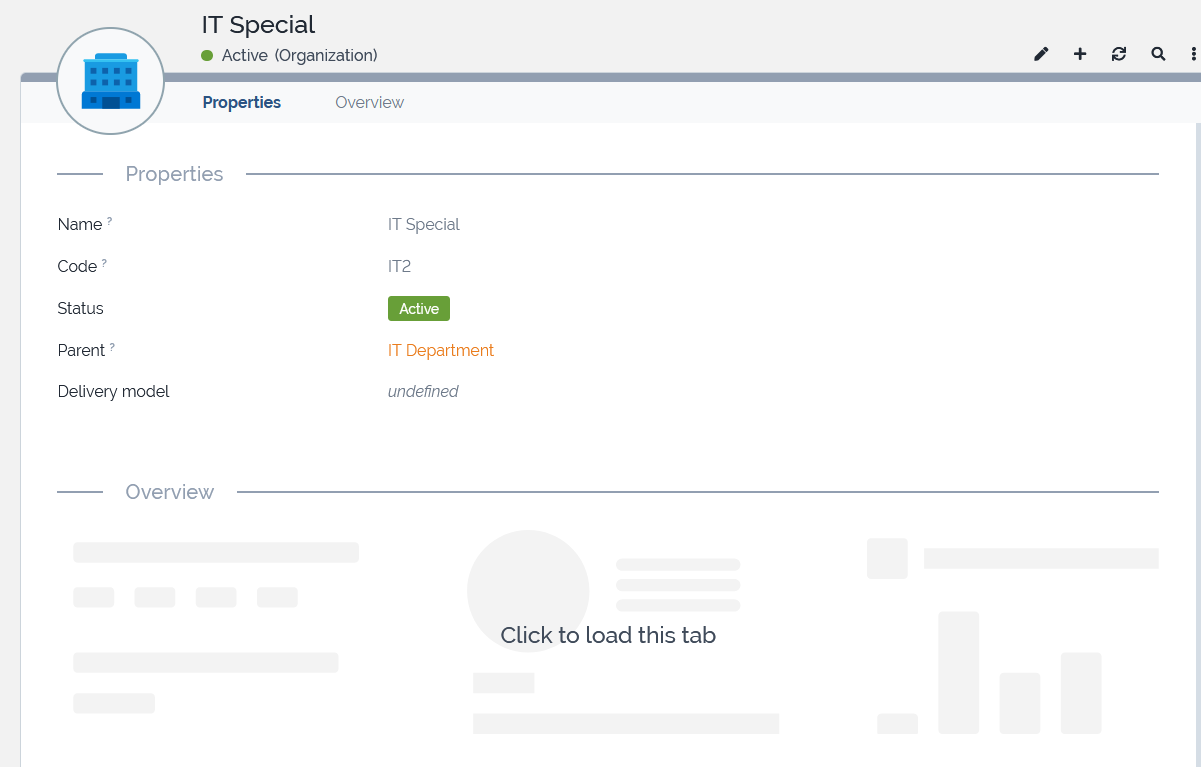 There are two ways to display the contents of an object, the choice being made in the user preference. This navigation setting applies on all objects of iTop, in read and edit modes.

Modification of an object

action, from the details of the object (The same action is also available on a list containing only one object).

The form used to modify an object is quite similar to its details. The only difference is that the fields are editable. For example, the form to modify a Person is displayed as shown below: For some of the fields, the value is not a free-text but instead must be picked from a drop-down list: 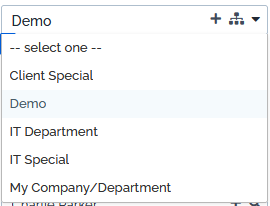 ) is available for values that are organized as a hierarchy.

) is a shortcut to create an object and add it to the list. The button is only available for users who are allowed to create this type of object. For example, when creating or modifying a ticket, click on the (

) button of the field Caller. The form is displayed to enable to create a new Person: 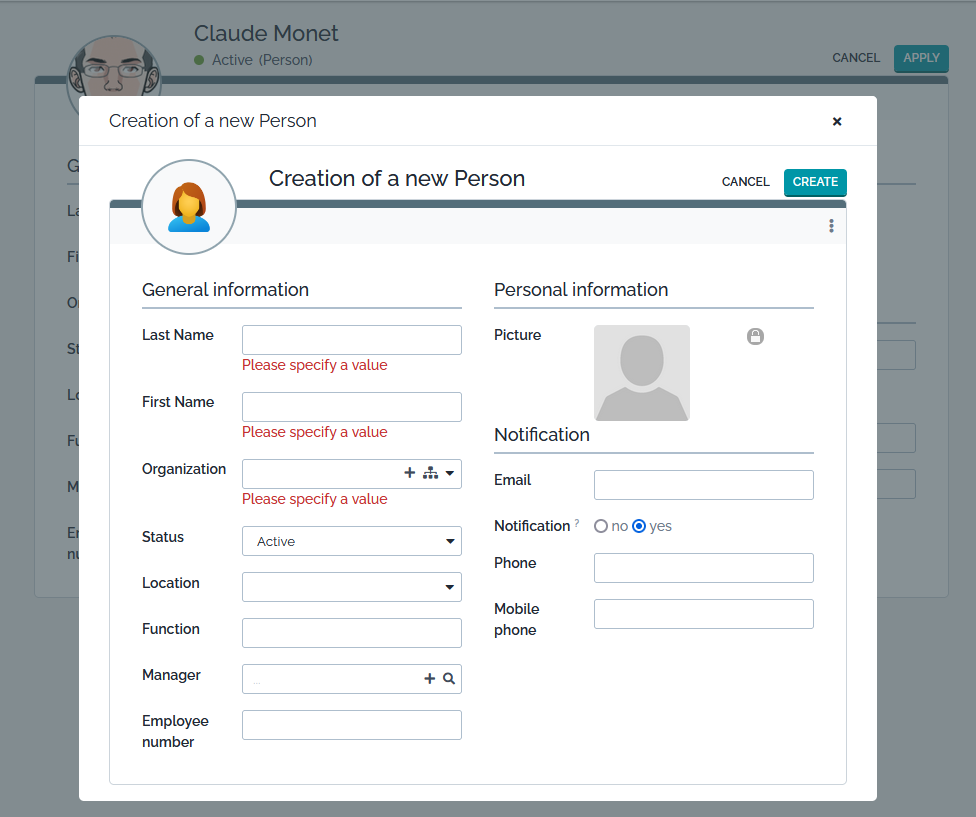 A red message appears when a mandatory field is left blank, or when a field does not follow the expected format for the field (for example for an email address). The modifications to the object can only be saved (using the Apply button) if all the fields are properly filled.

When the number of possible values for a given field exceeds a configured value (50 by default), the drop-down list is replaced by an autocomplete field, as shown below:

Type at least three letters to trigger the search and pick from the list of objects matching the typed letters, or use the magnifying glass button ( 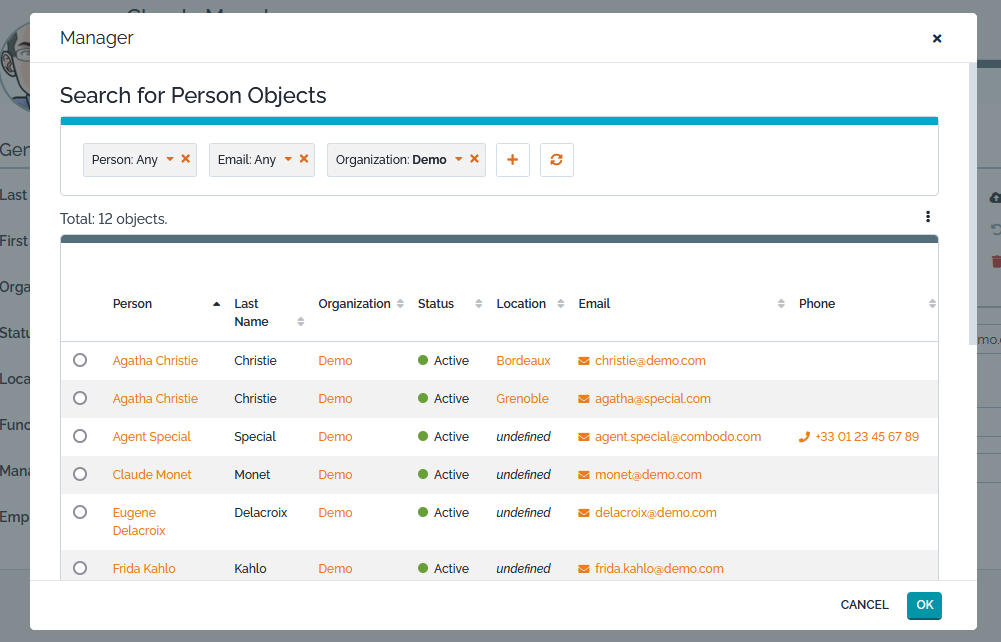 The search dialog lists all the objects. To narrow the search you can use the form at the top before selecting an object and click on Ok to return to the main form.

When editing an HTML field, (Caselog entry are HTML field), an embedded editor is included, check CKEditor site for its possibilities.

A new panel has been added, to speed-up a pretty common situation in which the agent just need to provide a reply within a log entry and maybe apply a transition. 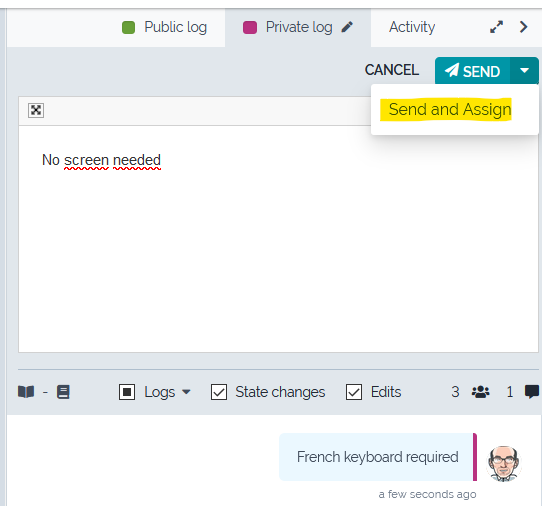 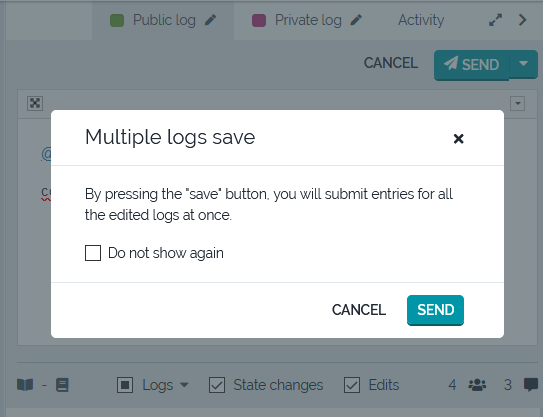 The history timestamps are relative when recent, eg: 3 days ago and absolute when older than a week, unless configured differently on your iTop. 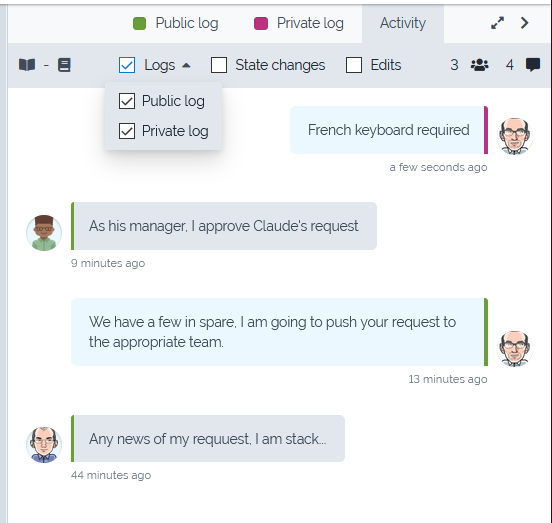 In the console an agent may want to quickly notify someone within a caselog to get their attention. 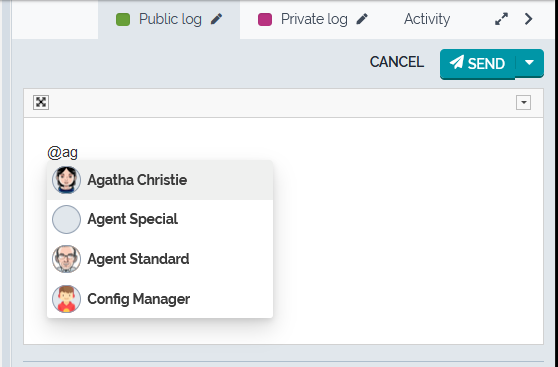 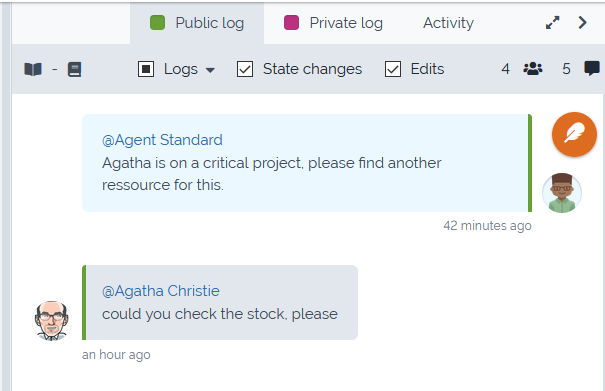 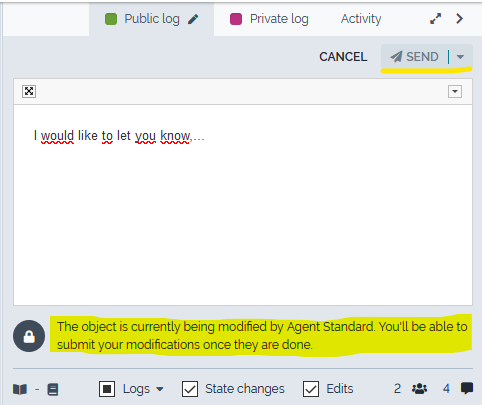 Attachments allow to upload a document (any file or image) into iTop and “attach” it to a given object in iTop. This is very similar to email attachments.

Attachments are related to the object they are attached to, and will be deleted when the object is deleted from iTop. If you want to upload files into iTop and have them “attached” to several objects in iTop, then consider creating “Document” objects. Refer to File documents.

To manage the attachments to a Ticket, click on the Attachments tab while creating or modifying a Ticket: Once attachments have been uploaded they are listed in the tab, with one icon per file. The name of the attachment is an hyperlink to download it.

Use the trash icon, at the end of the row to delete an attachment. It is not only removed from the current object (here a ticket) but fully deleted from iTop.

The changes to the Ticket (addition or removal of attachments) are actually performed when the Apply button is clicked. Clicking on Cancel for the Ticket form will cancel any change to the attachments.

Attachments can also be added by performing a drag drop of the files to attach, directly over the browser's window. When files are dragged over the “Attachments” tab, a blue shadow appears around the area where attached files are normally displayed: If the “Attachments” tab is not the active one when dragging, files can still be attached to the ticket and the tab itself shows the blue shadow during the drag operation:

In iTop most of the tabs displayed on the details of an object represent relations between objects. All these relations are managed in the same manner.

But there are two flavors of relationships, which are handled slightly differently in the background:

The form to modify the members of a “Team” looks like this:

In order to add members to the team:

To remove objects from the relation, check the corresponding line in the form, then click on the “Remove selected objects” button at the bottom.

Note that removing objects from the relation does not actually delete these objects from iTop. Only the relation between the objects is removed.
Modification on relationships (added and removed) will not be saved if you cancel the current object edition.
But if you have created a new object using the + icon, that object is created regardless of what you do on the current object edition.

On Tickets also we have the equivalent of the Manager-Person relationship with a “parent-child” relation. A Ticket can have zero or one parent, while a parent can have from zero to many children.
Another flavor of simple relationship is the Interfaces sub-objects on a ConnectableCI, where each sub-object must have one parent and cannot exist without it.

To detach related tickets from the current ticket, just select them by checking the corresponding checkbox and click on “Remove”.

Note that removing objects from the relation does not delete these objects from iTop. Only the relation between the objects is reset. (On the related Ticket the field that was pointing to the current Ticket is reset)
← The main screen
User Manual
Actions →
latest/user/display_and_modification.txt · Last modified: 2022/01/21 16:52 (external edit)
Back to top